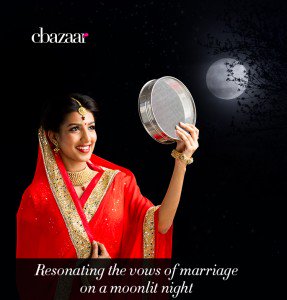 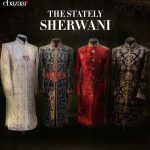 Sherwanis were conceived in the late 18th century ,as the result of an amalgam of the British Frock coat (common to the Edwardian and Victorian eras) and the Shalwar Kameez (traditional unisex attire of many South Asian countries). Sherwanis were initially worn only by Royalty and Aristocracy. It was a staple of the Mughal Nawabs and the Nizams of Hyderabad. 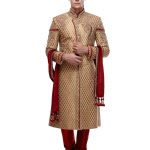 But what exactly is a Sherwani ? , it can be described as a slim-fit coat that is knee length at most times but can also be longer and commonly worn over a Kurta, which is a loose shirt that extends to the knees.The Sherwani itself is made from heavy suiting fabrics that are commonly silk or poly silk (mostly worn at weddings and lavish ceremonies) and cotton (for more informal occasions). The Sherwani is fastened in the front with buttons and is often heavily embroidered and embellished with sequins and crystals for the luxury appeal.When it comes to choosing colors for Sherwanis, bold, often rich colors seem to be the trend .Off-White,Cream,Maroon and Black add as much palatial appeal to a Sherwani as colors like Gold or Silver.Sherwanis are esteemed for their fusion of the best elements of Western and Eastern Styles. 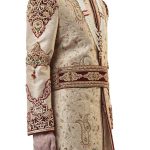 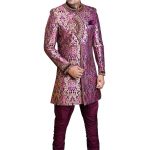 The great thing about Sherwanis is the fact that you can up the luxury appeal by accessorizing with several items like – a Stole which is similar to a scarf ,in that it is draped around the neck, Mojris or Jootis are the best footwear to go with a Sherwani while the addition of gold Cufflinks or a gold Bracelet wouldn’t be a bad idea either.

Apparently “the Nehru Jacket” which is a combination of a Sherwani and an Achkan (another variant of the Shalwar Kameez , a “cousin” of the Sherwani if you will) with a high collar was rarely worn by the man it was named after, as he preferred wearing the more traditional, Sherwani. It is also said to be the National dress of our neighbor – Pakistan, where it is compulsory for all officers of the government to be dressed in a Sherwani on important occasions and national holidays. 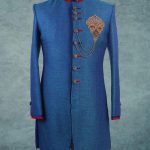 A Sherwani like variant also featured in the popular Television Series – Game Of Thrones, where one of the show’s most fiery and spirited characters – Oberyn Martel played by Pedro Pascal is seen wearing the outfit. 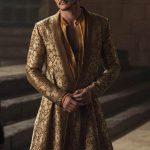 Designer Rohit Bal designed Sherwanis for the British Airways, to class up the cabin crew on flights to South Asia. Singer, composer, A.R .Rahman wore a stellar black Sherwani while receiving his Oscars. It was designed by Indian Designer – Sabyasachi Mukherjee who’s idea was to showcase this traditional standard of South-Asian clothing to the West. 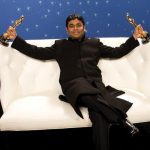 Cbazaar’s collection of sensational sherwanis are the very essence of what ethnic men’s fashion is all about. So buy sherwanis online this EID, and raise your style game this EID, for a timeless, elegance and poise. 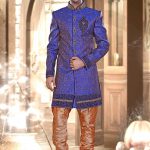 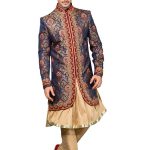