We have been seeing some amazing wedding pictures and even better wedding outfits. Apparently, two wedding is the new cool thing and it seems like Ranveer Singh and Deepika Padukone and Priyanka Chopra and Nick Jonas vouch for it. We were starry-eyed during the former couple’s wedding but Priyanka and Nick made our eyes pop out of the socket. A celebration like none other. Here are some of the exclusive pictures of their wedding. Before we go on to the wedding here is a little something about each of them for people who don’t know who they are( I am guessing because you just woke up from your decade-old coma you have no clue who Priyanka or Nick is).

Priyanka Chopra Jonas is an Indian actress, the winner of the Miss World 2000 pageant, singer, film producer and, philanthropist. She received her Padma Shri In 2016, was named the 100 most influential people in the world by Time, named the World’s 100 Most Powerful Women by Forbes and well the list goes on and on. She is one actress that gained a huge fan following in Bollywood as well as Hollywood. Nick Jonas American actor and singer. Famously known for his band The Jonas Brothers. He won a Grammy and Golden Globe nominee with fans all over the world.

Enough about them, let us get into the nitty-gritty details of the wedding and pre-wedding ceremonies.

Tons of colors, beautiful outfits and a very happy family were the base of this event. Priyanka won our heart wearing a vibrant Abu Jani Sandeep Khosla gown while Nick made us melt with his aqua bakhiya kurta. Well done you guys. You two nailed the look now it is our turn to try to keep talking and fangirling about it.

Who is the hottest girl in the world? My Desi Girl, duh! A sangeet ceremony that left all of us speechless. It had the right amount glamour, drama, fun and Bollywood thadka. With a dance face-off between the bride and the grooms family members, we are sure it was a treat. The desi girl wore an Abu Jani Sandeep Khosla wore an intricately hand-embroidered gold and silver sequins sari while her videsi prince charming wore a midnight blue sherwani with silk thread detailing. The temperatures have all risen up. 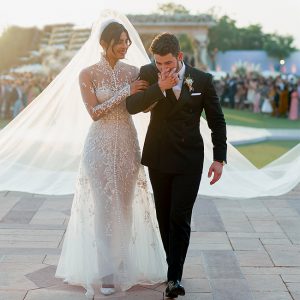 This was one dreamy wedding. Priyanka looked like a royal princess in her Ralph Lauren gown. A column dress embellished with pearlescent sequins was overlaid with a hand-embroidered, high-neck coat with scalloped sleeves and satin-covered buttons. That dress brought tears to my eyes, I wish I was a friend of Ralph Lauren. Let’ not forget the man of the day’s outfit. Our dear Nick wore a Purple Label double-breasted tuxedo with a piece of the bride’s dress hand-embroidered with the Urdu words “My Jaan” by none other than Ralph Lauren. I can’t take this anymore. 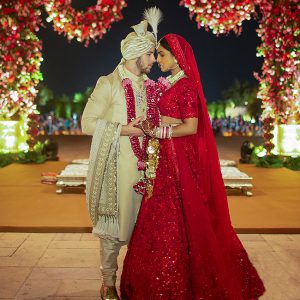 Priyanka and Nick’s Indian wedding are what wedding goals look like. She definitely stole the show in her red Sabyasachi lehenga. Hand-embroidered and hand-cut organza flowers, French knots in silk floss, delicate Siam-red crystals and layer upon layer of threadwork embroidery is what made all the ladies green with envy while Nick wore a hand-quilted silk sherwani with a hand-embroidered chikan dupatta and a Chanderi tissue safa(turban).

What did you think about their wedding? Which of her looks was your favorite? Do let me know in the comments below.

Most Loved Bollywood Celeb Looks – Stay At Home In Vogue

5 Best Ways To Pair a Top