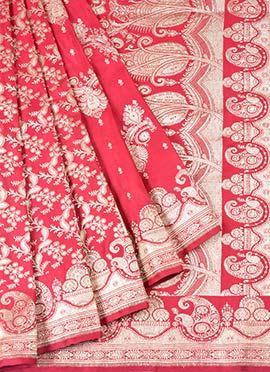 Indian traditional fashion has come a long way since its inception about 5000 years ago during the early stages of the Indus Valley Civilization. During this period people (both men and women) were said to wear only dhoti-like garments. Present day Indian ethnic clothing such as Indian silk sarees, salwars, Mens sherwani, kurta pajamas, lehenga choli, anarkali dress and the like did not come into existence until much later. The first signs of the existence of traditional Indian ethnic dress styles were from cave paintings and carvings originating from that era. It is clearly evident from these ancient pictorial inscriptions that people during those days clothed themselves in long unstitched pieces of garments very similar to the modern-day dhoti. It is believed that the more clothes and jewelry one sported, the more affluent that person was in society.
It is believed that during the Vedic age, women often sported dresses that comprised of three distinct/separate pieces. The uppermost garment – a strip of cloth called the kayabadh acted as the blouse, a lower body garment, referred to as the antariya or dhoti, and finally the third piece of cloth called the uttariya or the dupatta which was the main or most important part of the whole outfit was used to cover up the body. Over the years, because of foreign influenced from invaders and migrating populations the antariya slowly evolved into the bhairnivasani, which can be thought of as an ancient form of the Ghagra. It was typically stitched on one side and even tied around the waist with a girdle in certain parts of the country. Indian clothing only began evolving into what it is now with the advent of the Mughal era and the British colonization. During these periods Indian ethnic fashion evolved to a great extent with tons of variety in terms of style, fabric, and ornamentation coming into play. As Muslim women from these periods normally covered themselves and wore divided garments, their outfits resulted in the inception of the modern day salwar kameez, which as we all know is one of the most popular forms of Indian ethnic clothing in India today.
Apart from the huge influence of the Mughals in Indian fashion, the British also played a huge role in shaping Indian ethnic fashion. During the Victorian era, a lot of women in places such as Bengal did not have the practise of wearing blouses under the sarees. Because the British looked down on this, women began sporting blouses and petticoats resulting in the modern day saree style. Although Indian ethnic fashion has begun to make its mark on the global fashion scene only recently, the fact that its origins lie in such rich and varied heritages points to the fact that Indian fashion is certainly something that will take off in the future because of the increasing globalization and experimentation by Indian designers and fashionistas alike.

If you are someone who has always been fascinated by Indian ethnic fashion and are really looking forward to getting some dazzling Indian outfits or even Indian dress to wear in wedding, then the best place to do your Indian dress online shopping is from a well-reputed ethnic fashion website such as Cbazaar.com which is known for having one of the biggest Handloom collection online that include sublime wedding sarees, half saree styles, every variety of traditional mens clothing as well as huge collections of traditional Indian children’s clothing.