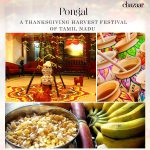 Pongal is the four-day long harvest festival of Tamil Nadu, Pongal is all about giving thanks to the god of nature. In tamil Language Pongal means “to boil” and is held in the month of Thai (January-February). ‘Ponga’ literally means overflowing .This festival is associated with the tradition of cooking the new rice in pots until they overflow, which is symbolic of abundance and prosperity.

Pongal celebrations continue from the 13th to 16th of January every year. The festival resonates a period of plenty, peace and happiness. Although the four days of Pongal equally holds prominence for most of the urban people celebrate the second day of Pongal with a great fervor and merriment. Pongal is the only festival of Hindu that follows a solar calendar. The first day of Pongal known as Bhogi, is marked with people cleaning their homes thoroughly of all the trash and unwanted goods which gets accumulated over a year and in the evening, all these unwanted goods are lit in a bonfire. Girls dance around the bonfire, singing songs in praise of the gods, the spring and the harvest. The significance of the bonfire, in which is burnt the agricultural wastes and firewood is to keep warm during the last lap of winter. 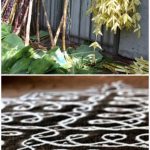 The second day is known as Perum Pongal, the most important occasion for Tamil community. It is also called Surya Pongal because on this day people worship Surya, the Sun God and his consorts, Chaya and Samgnya. Women decorate the central courtyard of their homes with beautiful kolams, done with rice flour and bordered with red clay. The main part of the celebrations evolves around the ceremonial puja that is performed when rice is boiled in milk outdoors in a earthenware pot and is then symbolically offered to the sun-god . There is a ritual of tying a turmeric plant around the pot when the rice is boiling. 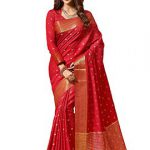 All people wear traditional dress and markings on their for-head . Men go for traditional Dhoti and Angavastram while women look beautiful in traditional Half Sarees, otherwise known as Pavada Davani. Irrespective of the fashionable outfits that women flaunt throughout the year, on this festival every South Indian woman prefers to opt for a Pavada Davani over any other outfit. This puja also has an interesting ritual where husband and wife dispose off elegant ritual utensils specially used for the puja. The offerings to god mainly includes harvested goods including two sticks of sugar-cane in background and coconut and bananas in the dish. 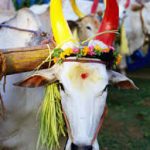 The third day, Mattu Pongal, is meant to offer
thanks to the cows and buffaloes, as they are used to plough the lands. Mattu Pongal is usually celebrated in the villages. The cows are decorated with multi-colored beads, tinkling bells, sheaves of corn and flower garlands and then they are worshiped. . They are fed with Pongal and taken to the village centers. Jallikattu, a violent taming the bull contest, marks this day. The resounding of their bells attract the villagers as the young men race each other’s cattle. The entire atmosphere becomes festive and full of fun and revelry.Arati is performed on them, so as to ward off the evil eye, Legend has it that once Lord Shiva asked his bull, Basava, to announce to the mortals of the earth that they are supposed to have an oil massage and bath every day and to eat once a month. On the contrary Basava traveled down to earth and announced that everyone should eat daily and have an oil bath once a month. This mistake enraged Shiva who then cursed Basava, banishing him to live on the earth forever. He would have to plough the fields forever and help people produce more food under this curse. Thus the association of this day with cattle.

The fourth day of Pongal Celebrations is called Kaanum Pongal. In few places this day is also known as Karinaal or Thiruvalluvar Day. It is dedicated to the sun god Freshly cooked food including the typical sweet dish ‘Sarkarai pongal’ is offered to him. Sugarcane stalks and coconut- both auspicious symbols of plenty- are also offered to the Gods in propitiation of a plentiful harvest in the forthcoming year. The wooman of the family gather in the courtyard after bath and freshly cooked pongal is placed on turmeric leaves . Arati is performed for the earning males of the family with turmeric water, limestone and rice, and this water is sprinkled on the kolam in front of the house.

The festival of Pongal is mainly associated with the rural people. The main celebrations revolve around cooking of the new rice. Various types of Pongal dishes are eaten during this time. Most popular ones are the Venn Pongal, Sakkarai Pongal, Chackra Pongal and sweet Pongal. Another popular custom is exchanging gifts on Pongal. In villages, farm labourers get ‘Pongal Padi’ or ‘Pongal Parisu’ as Pongal Gifts. Pongal wishes are exchanged between family and friends, and there are celebrations within the family. The festival of Pongal is held dear particularly by the farming community as it marks the end of harvesting season.